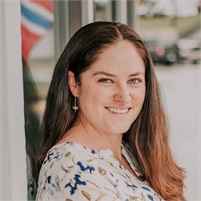 Amy moved to Petersburg in 2015 with her husband, Matt, and started working at P-W Insurance in March 2017. She became a licensed insurance agent in October of 2017 and works in both personal and commercial insurance. She grew up in Colorado, went to college in Colorado and Montana, and moved to Juneau in 2011 to start a new adventure with Matt, who was born and raised in Alaska.

Amy earned a Master of Science degree in biology from the University of Montana and loves all things nature and outdoors. Her previous employment and adventures include living in remote areas throughout Southeast Alaska while working on salmon research. Amy and Matt spent months at a time living out of a tent or cabin while working coho weirs or drift gill-netting king salmon. Eventually, they decided to try their hand at power trolling commercially and moved to Petersburg. Matt continues to fish commercially while Amy works full time at P-W Insurance. In her free time, Amy likes to hunt, fish, hike, kayak, paint/craft, make wine and spend time at home with her cat.

** My video is a little out of date – but still shares a little about me. We’re working on updating my video & I’ll post it soon.